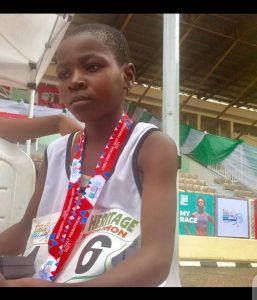 Eleven-year-old Abigael Ogunbowale on Saturday stole the show at the maiden edition of Ijebu Heritage Half-Marathon as she braved the odds to finish the 21km race at the Otunba Dipo Dina Stadium, Ijebu-Ode, Ogun State.

The young sprinter, a registered marathoner, completed the race to prove her resilience.

She was instantly rewarded with a sum of N250, 000 cash by the Chief Executive Officer (CEO) of Rite Foods, Saleem Adegbuwa, a co-sponsor of the race.

Adegbuwa commended Ogunbowale’s courage, adding that she was a beauty to behold as the curtain closed on the race.

“The courage of the young lad is a beauty to behold, and seeing such a girl competing with established stars in spite of her age was something. We are looking forward to seeing her getting better.

“As a son of the soil and being involved, I will say it is our thing and is really important that we bring events of this nature home. I mean world-class events like this.

“By DNA in Nigeria, we are good at sports; we just need to harness it so we can go international with it. I was not surprised today to see a 55-year-old and 11-year-old finishing the race,” he said

See also  We Are in Akure to Beat Sunshine Stars – Biffo

Adegbuwa noted that Nigeria was naturally blessed with talents and they would continue to get more backing from his company.

“We were naturally gifted and we just need to make sure the talents here are well-coordinated.

“We intend to do more in sports, with the Abeokuta Marathon also coming up later in the year, and we are looking forward to more like that,” he added.

Femi Olusanya, a police officer from Ijebu-Ode, came first among the indigenous runners who finished the race.

Kenya’s Hosea Kiplimo won the Half-marathon with the time of 1 hour 02 minutes 36 seconds and got the cash prize of 10,000 dollars.

See also  Real Madrid No Longer Have Faith In Me, Says Zidane

Timothy Ronoh, also from Kenya, won the third-place prize with 1:02:59, with Keneth Kiprop in fourth, while John Muriuri came fifth.

In the Female category, Kenya’s Sandra Chebet returned the time of 1:10:42 to emerge winner, while Ethiopians Gebaynesh Ayele and Beyenu Degefa were second and third in 1:10:52 and 1:11:02 respectively.

They claimed the title with a 4-2 penalty kick shootout win over Egypt at the Olembe Stadium in the final match of the 2021 AFCON in Cameroon.
Read more
Sports

No Formal Probe Yet After Accusations Against Former Chelsea Coach

Israel's police are yet to start a formal investigation against former Chelsea manager Avram Grant who has been accused of sexual harassment in a television programme.
Read more
Sports

A flurry of big-money moves before the transfer deadline at midnight Monday took spending by English Premier League (EPL) club sides to the second-highest ever for a winter window.
Read more