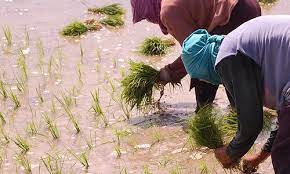 The Rice Farmers Association of Nigeria (RIFAN) says it has profiled 1,187 farmers to participate in this year’s wet season in Delta state.

Chief Sylvanus Ejezie, RIFAN Delta State Chairman, disclosed this in an interview with the Newsmen on Friday in Asaba.

Ejezie said participating farmers were leveraging the RIFAN-Central Bank of Nigeria (CBN) Anchor Borrowers Scheme, to cultivate a total of 1,187 hectares of rice farmland during the wet season.

The RIFAN chairman noted that the loan inputs from the Anchor Borrowers Scheme had earlier been supplied in 2020 which was utilised by participating farmers to go into this year’s land preparations and planting without delay.

Ejezie said some members had to go into early planting, particularly those by the River Niger banks in order to beat the annual flooding in the area caused by the overflowing river waters.

According to him, the farming system is not uniform across the state, some of us started the season cultivation in March and April, while those in the upland areas started in May.

“As we speak, we are in my 50-hectare rice farm here in Asaba doing bird scaring as it is almost ready for harvest because we planted early in March and April to enable us beat the yearly flooding in this River Niger area.

“Also, my 25 hectares rice farm in Aviara, Isoko North Local Government Area of the state is ready for harvest.”

Ejezie, who expressed hope for good harvest, said the loan scheme has been very supportive to farmers in the state.

“In this wet season, participating farmers under this programme are 1,187 and each of them is expected to plant one hectare of rice farm across the state.

“The inputs we are using for this season came in late 2020 and it is for the 1,187 profiled farmers in the state.