3 Months after His Abduction, Jangabe Schoolgirl Met Father in Kidnappers’ Den, Told by Dad Not to Recognise Him 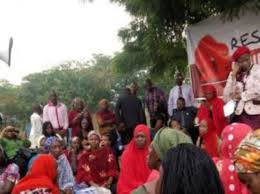 Mallam Iliya Gwaram, father of one of the Jangabe schoolgirls who recently regained freedom from captivity, has told a soul-wrenching story of how he spent three months in a den of kidnappers and was joined by his daughter after the attack on the Government Girls Secondary School Jangabe, Zamfara State.

He said when the abducted schoolgirls including his daughter were brought to the kidnappers’ den where he had been kept for almost three months, he discreetly communicated with his daughter’s colleagues seated close to him to tell her not to identify him as her father.

Speaking at the Government House, Gusau, Zamfara State, shortly after he was rescued from his abductors on Monday night along with nine other victims including nursing mothers and three toddlers, Gwaram said he had never cried as much as he did when he saw his daughter at the kidnappers den along with other schoolgirls and later taken away, because he thought that was the last time he would set his eyes on her.

His words:  “I have been in captivity with these other people for more than three months when on that Friday morning, l saw the school girls being brought into where we were camped by our abductors. At first, l didn’t know who they were or where they were coming from, until l saw the face of my scared daughter looking at me.

“I quickly told some of the girls who were brought along with her and sat near me to tell my child not to show any indication that she even knew me.

The girls were brave enough and they kept our little secret up to the last day of their four days stay with us.

“l had never cried in the whole of my life like l cried the day the girls were taken back because l felt it was the last time l would see my daughter.

READ  In The Throes of Death! Hunger Worsens in Burkina Faso as Violence Escalates

Fortunately and unknown to me, my daughter informed Governor Matawalle of our whereabouts and the poor health conditions we were, which led to our freedom today as facilitated by the governor and his security people”.

Gwaram also narrated how a ransom of N2million paid by the families of two women to secure their freedom from the kidnappers’ den was re-looted by another gang of kidnappers who intercepted the bearer of the ransom midway to the spot it was to be delivered and the hapless women were held by their abductors for over two months before they were rescued on Monday.

He said, “Look at those two women that we were rescued along with me, two million naira was said to have been raised by their relatives to give to the bandits more than two months ago. But the money could not be traced as it was suspected that it was a different gang that intercepted the man bringing the money and took it from him”.

Gwaram further spoke of how his daughter’s education saved them from danger in the den of their abductors.“If she wasn’t educated, she would have exposed me when she saw me and that would have put the two of us in danger. “I thank God for that and l will continue to pray that such a thing never happens to even my worst enemy”.

Most stakeholders in the North-Central and Taraba have rejected the law granting life pension to former governors and their deputies, describing it as unfair...
Read more
Scudlife

Sending My Son Abroad Influenced Him to Become Gay, i Regret it -Doyin Okupe

In an interview with Vanguard through the VanguardLiveTv section, Doyin Okupe, a former aide to Former President, Goodluck Jonathan has disclosed that he cried...
Read more
Scudlife

For several years, they had looked on to a day when their dream of tying the nuptial nut will become a reality; when they...
Read more