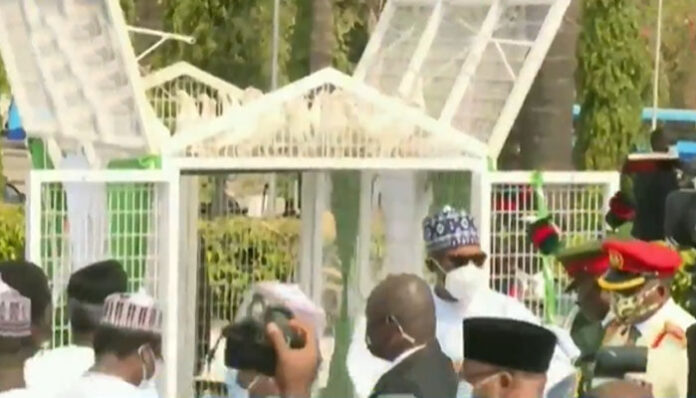 As Nigerians celebrate the Armed Forces Remembrance Day, the President of Nigeria, Muhammadu Buhari performed the symbolic tradition of releasing the white Pigeons as part of the activities of the day.

The Pigeons however refused to fly.

The President’s repeated effort to get the pigeons to fly, yielded no meaningful result as the Pigeons would still not fly and the few that made out of the cage only ended up perching on the cage.

Nigerians have however reacted as they gave several supposed reasons as to why the pigeons would not fly.

Some believe its a reflection of the current situation of things in the country.
Read reactions:

The pigeons failed to fly because they are hungry.
An hungry bird is a flyless bird

The pigeons will at least not be attacked for their effective civic disobedience.

They will also not be told by scoundrels of patriotism to relocate just because they pointed out evident facts of Bad Governance in their country.

How dare the recalcitrant Pigeons?! Opposition parties must be held liable for this failure to launch in the spirit of peace. Apologies Mr President, don’t mind them. The pigeons must be investigated and their collaborators smoked out. Nonsense. 😡 https://t.co/FRUIjlEHI6

Which kind country be this, pigeon sef no dey respect president💔

READ  Davido Reacts to Losing Personal Bodyguard of Over 11 Years

Kim Kardashian on Friday called out those who bully and body-shame others, recalling her embarrassment when she was attacked for gaining 60 pounds during...
Read more
Entertainment

Nigerian actor and former broadcaster Sadiq Daba, who is best known for his role as “Inspector Waziri” in the film October 1, has died. Daba passed...
Read more
Entertainment