Man Allegedly Beats Wife To Death For Denying Him s3x 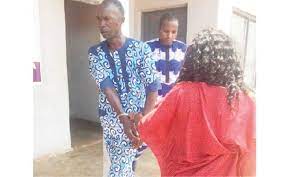 Police Command in Edo has arrested a middle-aged man who allegedly beat his wife to death for denying him s3x.

The spokesman of the command, SP Bello Kontongs said on Wednesday in Benin that the incident occurred

On June 27 at No. 1 Ogiedegue Street, off Ason Bus Stop, Evbuotubu area of Benin.

He said the case was transferred to the state command from Evbuotubu Police Division where the matter was first reported.

“The man was said to have demanded s3x from the deceased around 11 pm of June 27 and upon her refusal, he beat her up and in the process inflicted her with injury.

“She was rushed to four hospitals, three rejected her, but the fourth one referred her to the University of Benin Teaching Hospital where she passed on July 7, as a result of complications from the injury.

“The man is presently in our custody and will be charged to court for murder.”