NEWS ANALYSIS: Why Plane Crashes Are Rampant In Nigeria 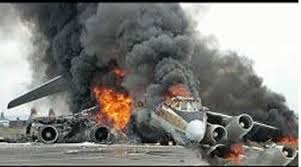 Observers in the aviation industry note that in February, a military aircraft crashed near Nnamdi Azikiwe International Airport, Abuja, in which seven persons died.

They recalled that in 2021 alone, we had three crashes associated with the military on February 27, March 31 and the third one was on May 21.

An aviation consultant has also observed that there has been an increase in the number of plane crashes and victims in recent times.

Ojikutu said the nation’s airports had had some deficiencies in terms of safety equipment over the years that might have led to crashes.

He said the weather had been one of the major causes of most of the crashes in the country, such as the ADC and Sosoliso crashes in 2005 and 2006.

On the crash of NAF Beachcraft that killed the Chief of Army Staff and Ten others, he said the statement by the Chief of Defence Staff indicated that inclement weather was responsible.

He observed that one of the problems that led to the accidents in 2005, 2006 was also as a result of inclement weather.

“That was the thing that caused the crash of ADC in Abuja and Sosoliso in Port Harcourt and another one like that.

“It was the wind shear and the government put in money to install wind shear system in all international airports.

“I think if I am not making mistake, somewhere along the line, all airports were installed with wind shear system.

“The question I keep asking every day is do we have proper periodic maintenance of this equipment because these are seasonal incidents that have to do with the weather.

“This happens at a low level and it happens when you are about to land or about to take off along the approach path.

“I also read that the said aircraft was diverted from military to civilian airport because there must have been a weather issue and I am sure that military airport there has wind shear system.

“My worry is that are we sure the wind shear system in Kaduna airport is working?”

Wind shear, sometimes referred to as wind gradient, is a difference in wind speed or direction over a relatively short distance in the atmosphere.

Ojikutu said the recent bird strike incident was also worrisome. He alleged that equipment was procured for bird strikes to some airports, especially in Lagos sometimes in 2006 or 2007.

He alleged further that there were concerns about whether or not that equipment was still functional.

The expert also spoke on the need for proper oversight on the airworthiness of aircraft and the safety of the airport where aircraft are landing.

But a security expert, Dr Kabir Adamu, Managing Director, Beacon Consulting Ltd. Abuja, pleaded with the federal government to evaluate the nation’s airport and its fleets to ascertain their current state.

Adamu noted that it had become imperative due to the incessant plane crashes in the country.

The expert decried the current state of the nation’s airports, particularly the fleets and the condition of service for the pilots.

According to him, once the evaluation is carried out, then the authorities of the agencies involved can actually know the actual cause of the frequent crashes.

“With this, the authority involved can now come to the conclusion whether the challenges need to be addressed immediately or to ground all the aircraft.

“However, globally, there are three or four reasons that are attributed to air crashes in any part of the world.

“It can be mechanical, human error, act of nature and shot down as a result of hostile activities.

“This is usually associated with conflict areas where there malicious act of certain individual or group.

“So, whether the regulatory body released the report or not, these four areas are the likely consequences.

“Unfortunately, only a thorough investigation will reveal which of these is more frequent in the country because we do not have the technology to determine what the reasons are immediately.”

The expert recalled that in 2021 alone, we had three crashes associated with the military on February 27, March 31 and the third one was on May 21.

“However, given the frequency, it is absolutely important that an investigation is conducted.

“If the reason is poor maintenance, then it means it is an internal thing and the military needs to deal with that urgently.

“If on the other hand, it is something that has to do with the pilots’ capabilities, then that should be taken up by the Nigerian Air Force (NAF).

“At the same time, if it is maintenance, then what type of equipment is there at the airport, and are they of international standard?”

He, however, expressed optimism that if the country could carry out a thorough evaluation of the airports and their fleets, it would go a long way in addressing the frequent air crashes in the country.

Similarly, Nigerians from different walks of life have urged the government to invest more in training and retraining of the nation’s pilots locally and internationally, to check plane crashes.

In reactions to Friday’s air crash that claimed the lives of the Chief of Army Staff (COAS), Lieutenant General Ibrahim Attahiru, and Ten other security personnel in Kaduna State.

Adekunle Makinde, the Former National Chairman, the Nigerian Institute of Electrical and Electronics Engineers, said that there was an urgent need for the training and retraining of the country’s flight officers.

“Honestly, the crash is becoming one too many and it speaks badly about the fight against insurgency. This is not good for the military.

“There is need too, to invest more in the training of our men, locally and internationally. We need to bring in the people to train them or send them outside the country, for more exposure and training.

“Let us engage in training the trainers for our men. Also, we need to regularly evaluate the fitness of our pilots, psychologically and mentally.”

Makinde stated the development was particularly sad because the country has lost its very best hands, which were at the peak of their careers.

“We have lost our Chief of Army Staff, who was contributing a lot to the fight against the insurgency; he had been doing a lot since he assumed office.”

In his view, Ovie Edomi, Publisher and Editor-In-Chief, South-South International Magazine, urged the federal government to ensure the recruitment of sound professionals in air travel.

“For a country’s military to experience three air crashes in three months, it implies that the military high command needs to look at so many things including the theory of conspiracy, lack of maintenance, and inadequate funding.

“Though I am not an aviation expert, l know from my years of flying that a twin-engine aircraft is not designed to just fail and crash. They should check their fuel suppliers and maintenance engineers thoroughly.”

“We also need upright and selfless leaders, as well as the orientation of the public on good leadership and followership.”