Pension: Why Retirees Are Canvassing Review Of Lump Sum 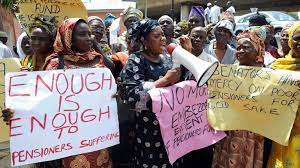 It is no secret that many Nigerian workers, particularly those in the public service, are unable draw their pension long after retirement from active service.

Many are known to have fallen ill, and some even died, while waiting for their pensions.

But with Pension Reform Act of 2014, the waiting time and casualties have reduced; now the narrative has changed to lump sum to retirees.

The consensus of stakeholders is that the lump sum, 25 per cent of the total Retirement Savings Account (RSA) specified by section 7 (1) (a) of the Pension Reform Act (PRA) 2014, is far too small to guarantee a decent life after retirement.

Hence, retirees are now pushing for an upward review of the lump sum from 25 per cent to between 50 and 75 per cent.

For instance, Mr. Peter Ejiofor, a retiree of a Federal Government agency, told the News Agency of Nigeria (NAN) that the lump sum should be reviewed to at least 50 per cent.

Ejiofor complained that the present lump sum was very poor and could not be invested in any meaningful business with the present inflation rate in the country.

“I am for the upward review of the lump sum to at least 50 per cent and with the monthly pension, pensioners can live a manageable life.

“It is better you are paid a higher lump sum of at least 50 per cent of your RSA and the balance spread as your programme withdrawal or annuity, than the other way round.

“When you receive a higher lump sum, you can set up a viable business that will be generating income for you”.

Moreover, he said someone who retired from active service after working for 35 years or 60 years of age should be wise enough to manage his or her life and money.

“Why would the Pension Fund Administrator (PFA) be managing the lives of retirees for them, and many of them are living below average standard,” Ejiofor added.

According to him, in spite of the fact that the current percentage paid is low, the monthly pension paid is too small for retirees to take care of themselves and their families.

“What will that cater for in the present economy, having received a lump sum above N4 million?” he queried.

Mrs. Morenikeji Osowo, a teacher who retired from the Lagos State Civil Service, also said it was not too much to pay pensioners 75 per cent as lump sum, after 35 years of active service.

Osowo noted that since the PFA’s had been in custody of the contribution for many years before retirement, they should not be holding a larger chunk of it after the retirement of the beneficiaries.

“The Contributory Pension Scheme (CPS) seems like a premeditated scheme to defraud pensioners through the PFA’s.

“After the PFA’s have been in custody of the contributions and made returns on the investment, it is sad that the retirees cannot access so much after retirement to invest personally for a lifetime,” the retired teacher said.

The cause of retirees now appears to be gaining traction, with the third annual retreat of the Pension Fund Operators Association of Nigeria (PenOp) and the National Assembly – Joint Committee for Establishment and Public Service of the Senate and House of Representatives Committee on Pension, held in July in Lagos, agreeing that the lumpsum be reviewed.

The lawmakers and pension operators said the retirees’ lumpsum needed to be reviewed to address issues of adequacy and agitation by contributors.

The Executive Director, Centre for Pension Right Advocacy, Mr Ivor Takor, told NAN that the move to review the lump sum was in the right direction, provided that the operators and other stakeholders were carried along.

Takor, also a former board member, National Pension Commision (PenCom) said there was a previous attempt by the National Assembly to review the lump sum but it was resisted by stakeholders.

He said this was because the legislators were suggesting 75 per cent without considering the views of the stakeholders.

He noted that the current percentage of the lump sum was too small and needed to be reviewed, especially in a country where there was no social security.

“Although there have been stakeholders’ contribution to the ongoing review of the pension Act already but the lump sum was not captured.

“Now that there is a move to review the lump sum, it should be discussed with the workers and other stakeholders.

“The legislature must also be careful that the percentage allocated does not affect the balance that will remain in the RSA to give a good pension to retirees who are either on annuity or programmed withdrawal.

“You know if we leave it to the workers, they will say give us 75 per cent, not considering that after they collect the lump sum and it finishes, they will remain in destitution and poverty, which is against the objective of the reform”.

He says the essence of the CPS is for pensioners to have a better life, closer to when they were working, at retirement.

In his reaction, Mr. Wale Odutola, president, PenOp, said the PRA 2014 should be reviewed wholistically and not just the lump sum.

Odutola explained that the objective of the review was to ensure that the agitations of the pensioners were addressed in a reasonable manner.

“This is necessary because with pension, the only logical thing we are after is that at the end, retirees still get an appreciable monthly pension after retirement.

“The only implication is that an increament in the lump sum would lead to a decline in the programmed withdrawal or annuity payable as monthly pension,” he said.

Mr. Saleem Abdulrahman, Head, Contribution and Bond Redemption Department, PenCom, at the 2021 Journalists Workshop, organised by the commission, also called for clarity on the objective of the pension reform.

Abdulrahman said the objective of the pension reform was to assist the retirees not to become a liability to the society by getting a monthly allowance.

“We must understand the objective of pension – which is to assist the retirees in old age.

“By the time the retirees get the money as lump sum and squanders it and doesn’t have anything to assist him or her in old age, then, the whole objective of the reform may be defeated,” he said.

With the divergent views of stakeholders, there is no gainsaying that the PRA 2014 has recorded unprecedented turnaround in the pension industry.

The reform also boosted the economy, following massive accumulation of capital for economic development through lending and investment of idle funds.

Amidst the foregoing, however, there is an urgent and compelling need to address the grey areas of the Act, and put to rest the agitations of the pensioners.

Now That WHO Has Approved Malaria Vaccine: Which Way Nigeria?

But in July 2015, the RTS,S/AS01 (RTS,S) malaria vaccine passed its phase III clinical trial and was adopted by the European Medicine Agency.
Read more
Features

My pleasure to be here once again to present the 2022 Federal Budget Proposals to this distinguished Joint Session of the National Assembly.
Read more
Features

On his part, the President of the Nigerian Bar Association (NBA), Olumide Akpata, said he would seek an audience with the CJN on the issue.
Read more

This appeal is contained in a statement made available to newsmen in Akure by Mr Richard Olatunde, Chief Press Secretary to the Governor.
Read more
Load more