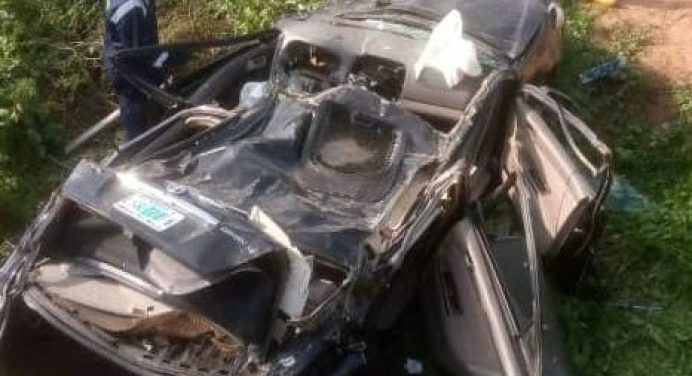 The police in Yobe State are investigating the circumstances surrounding a single car crash on Wednesday, May 19, in which five teenage girls, including three siblings, were killed.

While four of the deceased teens whose ages ranged between 12 and 15, died on the spot, the fifth reportedly died before reaching a nearby hospital where she was rushed for treatment.

As of the time of filing this report, Scudnews could not confirm their destination, but it was learnt that the accident which raised curiosity, occurred at about 11.am while the teenagers were riding in a Honda Accord bearing registration number FKA 635 AA.

Curiously, the driver of the vehicle whose name was given as Lawal Mohammed, an indigene of Potiskum, Yobe State, escaped the devastating crash unhurt, and has been arrested by the police for questioning.

The police said bodies of the five teenagers which were initially deposited at the General Hospital Damagun for autopsy, have been released to the families for burial according to Islamic rites, but assured that investigation into the accident was in progress.

The remains of Elder Andrew Ebikemefa Larri, aged 68, who slept in the Lord on September 21st, 2021, would be interred on November 20, 2021.
Read more
Scudlife

A boy who returned home after sojourning for three years got more than what he bargained for when his mother found him with a gun.
Read more
Scudlife

Bandits Were More Interested In Capturing than Shooting Me -Dairo, Pilot Of Fighter Jet Shot In Zamfara

Flt. Lt. Abayomi Dairo, pilot of the ill-fated Alpha Jet that was gunned down by bandits in Zamfara State while on a mission speaks.
Read more