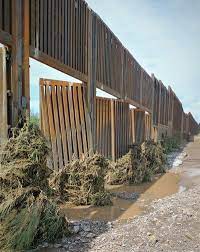 Severe weather in southern Arizona appears to have damaged parts of the border wall erected by the Trump Administration.

The Tucson Sentinel reports that U.S Customs and Border Protection agents had confirmed “historic’’ flooding at the nation’s border with Mexico was to blame for the destruction.

That appeared to include several wide-open metal gates separated from their hinges and in some cases, stuck in mud and detritus.

Monsoons have sent thousands of gallons of floodwater into the area in recent days, threatening to break a record for rainfall that had stood since 1964.

During his campaign for the White House, former president Donald Trump vowed that he would build a mighty wall, which would be paid for by Mexico.

“Nobody builds walls better than me, believe me. And I’ll build them very inexpensively,’’ he said in June 2015.

Funding for the parts of the border wall Trump built before leaving office in January came from federal monies that included billions of dollars from the Department of Defense.

Kate Scott of the Madrean Archipelago Wildlife Centre described the damaged gates as being in a state of “disrepair” alongside a photo she posted on Twitter.

Jose Manuel Perez Cantu, director of the nonprofit Cuenca de Los Ojos, told Gizmodo that he knows of six gates at a single location that had been destroyed by flooding.

Dikeh said that initially, the negative things people said about her used to make her sad before discovering that she could build on it.
Read more
Entertainment

Omo Ghetto’ (The Saga), a comedy movie by Nollywood actress Funke Akindele-Bello a.k.a Jenifa, will be premiere on Netflix on September 10.
Read more