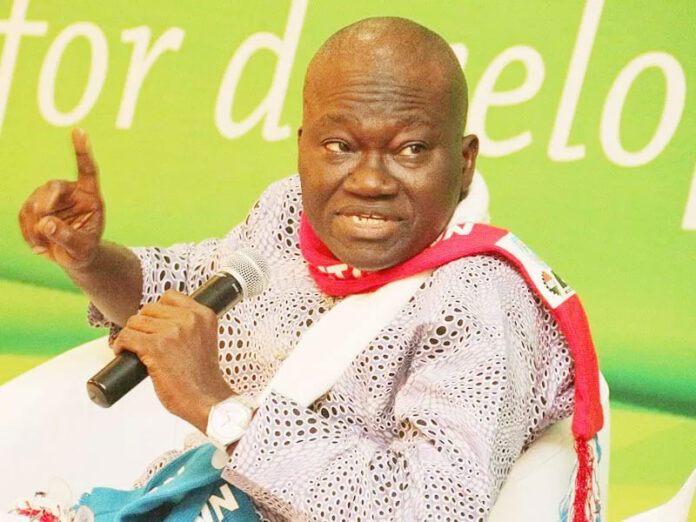 “When men are ruled by fear, they strive to prevent the very changes that will abate it.” – Alan Paton, South African writer

“When fear comes in the door, logic goes out the window”. -Ina Perlman
Chief Robert is a respected Senior Advocate of Nigeria, Clarke, (SAN). Last Sunday he unsettled many of his compatriots inclusive of yours comradely). He curiously and magisterially declared ( hold your breath for the slander !) that “Nigeria may not survive the next six months”.

While lamenting the spate of insecurity in Nigeria on Channels Television’s Sunday Politics, the senior lawyer in loud sound and fury declared that ,

“Many things are happening and I swear by my father’s grave, if care is not taken Nigeria will collapse in six months time.”

It is strange that an octogenarian would ever swear for an apocalypse rather than pray for peace. It is even a scandal that an elder would swear with a late father resting in perfect peace in the grave. Who then would guide “ our youths the truth to know” (national anthem) when our leaders are as misguided and xenophobic?. The late Fela Kuti in his grave would have exclaimed “Just like that”! It’s really a “ wonder” “ Wonderfulment” as Fela put it in his “Just like that album”. It’s simply unfathomable that a Senior Advocate of Federal Republic of Nigeria would verbally assault a Republic, (without which he and other current fashionable nation- building skeptics would not have been known).
Paradoxically by his own reminiscence, Chief Robert once disclosed that he “ was .. privileged to be a classmate to the late Fela Ransome-Kuti, later known as Fela Anikulapo Kuti; his brother, the late Beko Ransome-Kuti”. As a fan of the Kuti brothers, particularly Fela and Beko, I bear witness that never in their moments of documented frustrations, did they whimsically give up on Nigeria to the point of wishing and swearing for the collapse of a country of 200 million Africans. On the contrary. Up to his death, the legendary, Fela inspired hope for a strong united Nigeria, Africa peaceful and inclusive world. Fela bemoaned with his legendary saxophone the perennial crisis of governance since independence manifesting in serial revelations of “Authority Stealing”, police and military brutality and shortages of water, light and food. But never betrayed faith in a united indivisible, just and fair Nigeria and greater Africa.

At times like this, certainly Chief late Gani Fawehinmi, ( another SAN like Chief Roberts) just like late Fela Anikulapo Kuti would not have declared a distasteful post dated “collapse” of Nigeria. Fela was not so honored like Chief Roberts who “took the Silk” in the past 15 years, after almost 50 years in rewarding legal practices in Nigeria which on his own account nurtured him from orphanage to an remarkable and enviable position of statesmanship in his own deserved rights. But he was a standing patriot to the end. The consolation is that there are once positive quotable quotes of Chief Roberts Clerke beyond last Sunday hysterical outburst. The worthy life and times of Chief Roberts on his own account belie the doomsday hysteria that Nigeria would collapse. Indeed, his profile underscores the fact that Nigeria has come of age, survived two world wars, lowered the British Union Jack flag in 1960 survived unfortunate 3 years civil war with its human devastation, survived prolonged military dictatorship and so far is deepening democratic process in the last two decades with all the challenges of insecurity.
Of dual British father and “Hausa/Fulani” ( in his own words) , mother, Chief Roberts was born in on July 11, 1938, “later fostered ..to a Yoruba family”, ( in his own words!) attended the best of public primary and secondary schools, graduate schools with scholarships at home and abroad. He was once the lawyer to the late President Shehu Shagari!. At 80, Chief Robert Clarke should be attributed with motivational words for his children and grandchildren in a prosperous, peaceful Africa. Not unhelpful fear and tele-phobia about a doom.
As we have seen with the consequences of collapse of former USSR and Libya, collapse of states is better imagined than being experienced. The recent fashionable but unhelpful verbal and physical attacks on Nigeria point to the degeneration of the Nigeria elite in addressing the crisis of nation- building. Certainly it’s time Nigerian elite organizes their thoughts about Nigeria and stopped open agonizing of dubious value.

There must be a collective realization that we are dealing with legacy problems of underdevelopment, mass poverty and inequality which in turn fuel current youth unemployment and violence of varying dimensions. Yes the current challenges might be “overwhelming” but the solutions are not in anger and addictive baseless fears. I agree with Desmond Mpilo Tutu the South African Anglican cleric and theologian, that “Resentment and anger are bad for your blood pressure and your digestion”. Lest we forget the “ bitter heart devours its owner”. There is a Yoruba received wisdom that we should not “..run the world hastly; Let us not grasp at the rope of wealth impatiently; what should be treated with mature Judgement, let us not treat in a fit of temper” .

READ  Abdulrasheed Bawa And The Urgency of Rebranding EFCC

To allude to a collapse of ones country is a slander: we dare not repeat such slander; Compatriots should not even even hear it; for it is the result of unhelpful “hot temper”. Happily, “ a stone thrown in anger never kills a bird! I agree with Jackie Mason, the American Author/Comedian who rightly observed that in the final analysis all “Predictions are preposterous”! Indeed most negative predictions about Nigeria, with the benefits of hind sights are at best absurd and ridiculous, and at worse, foolish and laughable. False predictions about Nigeria include that of the German author, Karl Maier, a native of Louisville, Kentucky’ who according to his 2000 booklives in London’ (not Lagos!). In his provocative controversial notorious title; ‘This House Has Fallen’, Karl Maier concluded long before year 2000 that Nigeria would collapse as a nation state! In late 1990s, it will be recalled that Nigeria was in the crisis of transition from military dictatorship to democracy with coups and counter coup plots, serial deaths of political notables such as General Shehu Yar Adua, Chief Moshood Abiola and General Sani Abacha. The subsequent “sharia” crisis of 2001, 2002, and the serial bloodletting across some major cities of the North increased the noise level of Maier’s predictions. Thank God and resilience of Nigerians, this house called Nigeria has NOT fallen contrary to the doomsday scenario of Karl Maier. Another celebrated false hysteria about Nigeria came from a former American Ambassador to Nigeria (2004 -2007), professor John Campbell. In a hysterical preview of his book entitled; ‘Nigeria: Dancing on the Brink’ he had claimed that “The 2011 elections in Nigeria, scheduled for January 22, pose a threat to the stability of the United States’ most important partner in West Africa.” Of course in 2005, we recall a so-called CIA Report according to which Nigeria would be a failed state in 2015. It is again to the eternal resilience of Nigeria and Nigerians that Nigeria weathered the political storms of 2011 and indeed the most challenging of all 2015! The challenge today is that of democratic consolidation, war against banditry and criminality which is only possible with national consensus and solidarity.

Notwithstanding the current challenges, Nigeria has shown that like most nation-states, the challenges of development are always there. The issue is the capacity to overcome them. Things may occasionally fall apart, but with determination, things can fall in place.

Worried by the increasing insecurity and attacks on police personnel and other public infrastructure in the South-East, the South-East Governors’ Forum on April 11,...
Read more
Public Sphere

Moo is that long, deep sound a cow makes intermittently. It can be irritating sometimes. Figuratively speaking, the Attorney-General of the Federation and Minister of...
Read more
Public Sphere

NEWS ANALYSIS: Why Plane Crashes Are Rampant In Nigeria

Observers in the aviation industry note that in February, a military aircraft crashed near Nnamdi Azikiwe International Airport, Abuja, in which seven persons died. They...
Read more