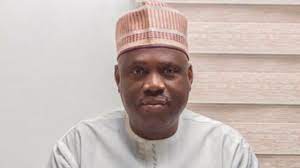 Representative Rimamnde Kwewum (PDP-Taraba), says there has to be an immediate change in the leadership of the Peoples Democratic Party (PDP) if it plans to win the 2023 presidential election.

Kwewum, who represented Donga/Takum/Yangtu Federal Constituency, said this when he spoke with the Newsmen in Abuja on Monday.

“It is imperative for PDP to be competitive in the next election. There has to be a change now, not later, in the leadership of the party.

“Normally, when a party leadership leads a party to defeat, it resigns to make way for people with new ideas to take over. That had been the standard around the world,” he said.

Kwewum also faulted claims that the PDP was faced with crisis within its membership.

“I don’t think there is any crisis in the PDP. What we have now is that some members such as the Governor of Rivers and some people at the National Assembly and a greater majority of members of the party think that the national chairman has done enough, even though his tenure will not elapse until November.

“But we think it is expedient for him to leave the scene for some other people to try so that we can have time to reorganise the party, do a genuine reconciliation of party members.

“As you know, the party has some challenges in some states where there are cases in court. We have some state congresses that have not been concluded,” he said.

Kwewum added: “We think that it will be good to have somebody that is not part of the crisis to manage the process of reconciliation and the process of reorganising the party to be able to fight effectively during the 2023 general elections.

“Some people may feel offended that such a call is coming but I am of the view that this call should have come even before now.
“But it is clearly observable that there are frictions, there are some challenges that it will be better for the party for a new leadership to resolve.

Not that there is any crisis. The party is not in factions as far as I know.

“You know that when PDP had crisis, we had two parallel chairmen, caretaker committees until the court resolved.

We don’t have that situation today, so there really isn’t any crisis.”