Racist Abuse Will not Stop Me -Kilmarnock’s Dyer 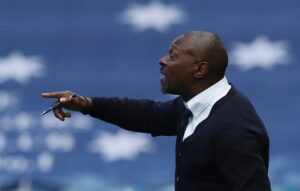 Kilmarnock boss Alex Dyer said he will not allow racist abuse to deter him from doing his job after the 55-year-old Englishman was targeted this week.

Kilmarnock said they had contacted police after receiving a letter on Monday containing “racist abuse” directed at Dyer, the only Black manager in the Scottish Premiership.

“What’s happened to me is not about Kilmarnock, because the Kilmarnock people have been good to me” local media quoted Dyer as saying.

“It’s about someone who has a grievance against my colour, it’s as simple as that. I work hard every day, I give my all, because it’s the job I love doing. I’m never going to let someone like that deter me from doing my job. It’s in the police’s hands and they will get on with it now”.

Dyer said it was important to “carry on doing the right thing” in the face of racism.

“I can bat it off because I’m in a privileged position but there are people out there who don’t have anyone so it’s for the likes of me to keep talking about it. …We take the knee, keep getting the message out there and hopefully one day there will be no more”. (Reuters)

Confederation of African Football (CAF) has opened the bidding process for the country which will host the inaugural edition of its Women’s Champions League.   The...
Read more
Sports

Diego Maradona, Argentina’s late soccer legend’s Porche said to be worth $240, 800, is up for grabs in an online auction which will last...
Read more
Sports


READ  Benin Jailbreak: Obaseki Issues Ultimatum to Fleeing Inmates
Godwin Izilein, a former coach of the Super Falcons, has pleaded with the Nigeria Football Federation (NFF) leadership to pay to him his outstanding...
Read more