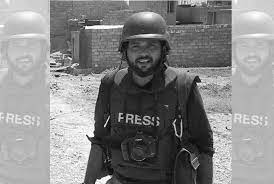 A prize-winning Indian photographer, who worked for Reuters news agency, has been killed in Afghanistan’s southern province of Kandahar, officials said on Friday.

Danish Siddiqui, a Mumbai-based photographer, was covering the clashes between the Taliban and security forces in the Spin Boldak district of the province, when he was shot dead, probably by a sniper, province spokesperson Bahir Ahmadi said.

Siddiqui had spent the past two weeks in Kandahar, covering the situation in the province, according to Ahmadi.

Spin Boldak district shares a border with Pakistan and is home to one of the main border crossings in the country.

It fell to the Taliban late on Wednesday after little resistance, according to officials.

Afghan Interior Ministry spokesperson, Tariq Arian, also confirmed the death of the Indian photographer but did not provide further details.

Many in Afghanistan expressed their condolences over the photographer’s death.

According to a report by Reuter’s news agency, Siddiqui had worked covering the conflicts in Afghanistan, Iraq, the refugee crisis of Rohingya, Hong Kong protests and Nepal earthquakes since 2010.

Siddiqui was part of a Reuter’s team who won the 2018 Pulitzer Prize for their photography covering the Rohingya refugee crisis, the agency said.